The Disc Test-An effective or obsolete tool for recruitment 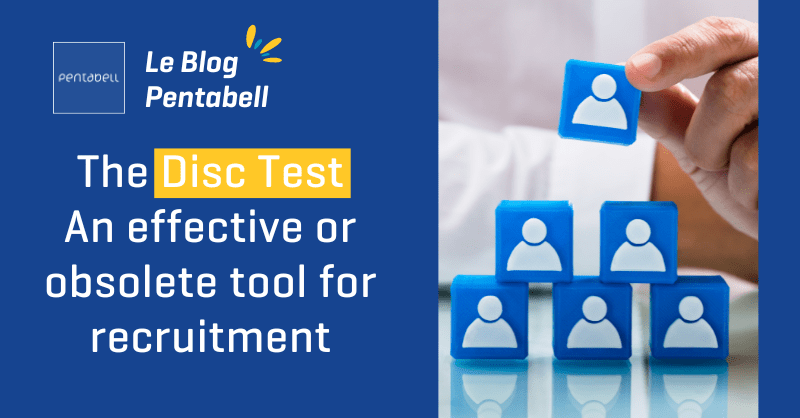 Are you preparing your next recruitment campaign? or you are already interviewing for an x position for x need … but you need to be equipped with the right tools, to better know the soft skills of your future collaborator. How will he/she integrate into the team, will he/she succeed in boosting sales? Or how will he/she react to conflicts?

Generally, the job interview is the opportunity to get a first idea of the profile of the new recruit, apart from the onboarding phase which allows for a more in-depth analysis. In addition, recruiters can use personality tests to better discern the character traits of candidates and thus better compose their workforce and reach their best commercial potential.

The DISC test is one of the oldest and most widely used personality tests in the world today, even if it is not universally accepted. We will discuss it in more detail below.

What is the DISC test?

The acronym DISC refers to Dominant, Influential, Stable and Compliant (or sometimes Conscientious). It is a behavioral assessment that provides an understanding of a person’s behaviors and priorities through their responses to a series of questions. The results of the DISC are then presented in the form of a graph that lists these four behaviors.

Dr. Thomas Hendrickson then evolved this theory to create the PPA (or Personal Profile Analysis) test for the workplace in the late 1950s and early 1960s.

Since the model is not copyrighted, it has been taken up and developed by various test providers. However, the DISC test, which was invented in the 1920s, is still the basis for this.

How does the DISC personality test work?

The DISC method classifies people into 4 categories, according to the objectives they would have selected, the ones they think best describe them.

The exact method depends on the provider and the focus of the test. Various commercial providers offer DISC tests that can be taken online or in writing.

Furthermore, the results do not allow for any quantifiable comparison, so person X cannot infer from the test results that person Y is less diligent or less influential in any particular way. The result simply indicates the subject’s predominant behavioral profile.

The candidate’s behavior and emotions are evaluated using a DISC questionnaire. The following four personality types are recognized: 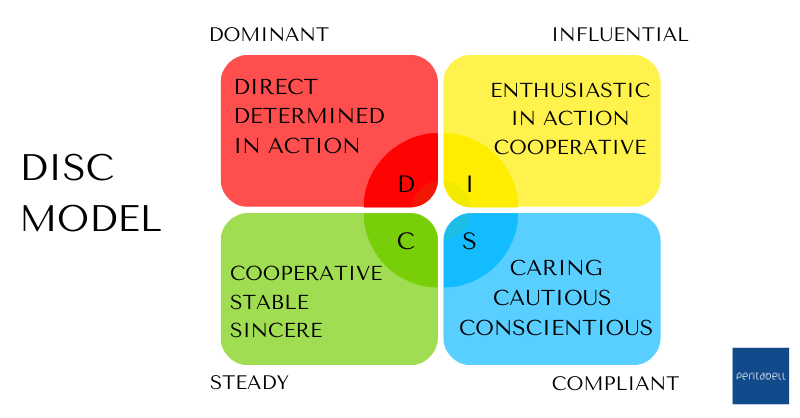 Determination, self-confidence and assertiveness are the traits of the dominant personality. People with this profile take the initiative and like challenges. They are direct in their communication and act with determination. People around them sometimes see them as aggressive and insensitive.

The influential personality type has a propensity to get excited about new circumstances and concepts. They like to work in teams and are outgoing and communicative. They are gregarious and talkative. They are generally seen by others as outgoing and charming. Although not very detail-oriented, their creativity and initiative in their work more than make up for it.

The stable personality type likes to work willingly in the background and is naturally very helpful. They value stability and cohesion. They enjoy working in groups and are considered kind, patient and understanding. Stable types tend to be conservative. They have difficulty adapting to change. He prefers stable work procedures and lasting, reliable relationships.

The conforming personality type is factual and strives for perfection. They analyze situations methodically, strategically and meticulously. He is a diplomatic communicator who also has a thirst for knowledge and a concern for quality. However, he has difficulty lowering his standards, both for himself and for others.

Where can you take the test?

How can the DISC test help you in the workplace?

The DISC method has many applications in the business world. Since its findings are useful whenever communication and collaboration need to be improved.

HR teams use the DISC method both for existing employees (e.g. to determine their best area of assignment) and for candidates (e.g. to find out if they have the qualities required to fit into a team). Infine, the DISC test is used for management development, sales and conflict management.

The test benefits the individual employee as well as the company. Employees (but also managers) who take such tests can learn more about themselves, better understand their own needs and have levers to develop their strengths. At the same time, by understanding the different profiles and their characteristics, they can better adapt to the behavior of customers and colleagues.

The test results not only reveal the traits that make up a profile, but they also indicate detailed information for daily life. For example, the assessment indicates:

Some vendors offer purpose-built DISC personality tests that include more information about the business context in their assessment. Managers, for example, can learn to better manage their leadership style, and salespeople can learn to use DISC to improve their sales results.

How can the DISC test help employees?

How reliable is the DISC model?

The DISC test predicts how individuals will respond to specific problems, work pace, procedures, and other people. It is not intended to predict a participant’s ability to respond to a problem or interact with others, but rather how they approach these situations. That said, the DISC process is known to be highly reliable, which means that the results are highly relevant to the participants.

What other personality tests are useful in the professional field

Personality tests are popular in the business world because they help answer important questions (who has the qualities to lead? which candidate is the most qualified?) and show you how to collaborate more effectively.

The DISC test is just one of many personality tests available. New tests incorporating the latest research findings are regularly released. Other popular personality assessments include the Myers Briggs Type Indicator (MBTI), the Reiss Profile, and the Clifton/Gallup StrengthsFinder.

That said, keep in mind that all tests have flaws, and none are capable of representing the full complexity of a character. In addition, personality tests tend to encourage “pigeonholing.” When a person is pigeonholed, he or she may be hindered rather than encouraged in his or her development, because he or she is limited to certain strengths.

The usefulness of a personality test such as the DISC depends heavily on the purpose of the test, the quality of the assessment, and the application of the results, which must be done responsibly, keeping in mind that no test provides absolute truth.

How to Network Effectively: 10 Tips to boost your professional growth

Although the Covid-19 pandemic has accelerated the transition to online employment, our desire ...
Read More
Career Advice
0 Comments

How To Reach Your Full Potential-Personal Development Guide

I know all too well this feeling, like being trapped in a never-ending ...
Read More